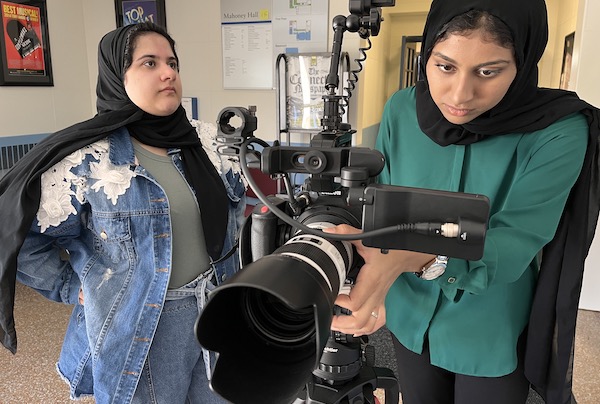 A letter bathed in light sits on a table in a dark space. A woman comes forward, sits on a chair and unrolls the note. His eyes consume the words we cannot see. She twists her wedding ring around her finger twice. After a few seconds, she tears off her ring and puts it on the letter. To cut!

Without dialogue, a story is told.

This task is a prompt developed by Visiting Professor Dan Frank, who teaches a three-week digital media course to seven students from the United Arab Emirates (UAE). He designed the exercise to demonstrate how the framing of a shot, the type of camera lens, and various lighting techniques can work together to cause excitement, drama, and tension.

“I wanted the students to spend most of their limited time working with the lenses, cameras and lighting rather than spending a lot of time developing a script,” says award-winning film and television producer and director Frank. television programs. “The best way to do that was to bring them in and see the effects their decisions have on the final story.”

The accelerated three-week summer course is the result of links that were established in 2014 between the College of Fine Arts, Humanities and Social Sciences and the higher education sector in the United Arab Emirates. The students, who hailed from the Higher Colleges of Technology (HCT), the largest applied higher education institution in the United Arab Emirates, earned six academic credits towards their degrees.

“With the launch of our new Digital Media major last year, HCT decided to send its students to UMass Lowell to expose them to our curriculum and American culture,” says Wael Kamal, Assistant Dean of the College of Fine Arts. -Arts, Humanities and Social Sciences. “They learned about digital media from a renowned expert, toured the area, and connected with our students and community.”

Rawda Almarzooqi, who is in her third year at HCT, was excited to learn production skills and soak up the local culture.

“My experience is great because I’m learning from Dan Frank, my teacher in this course, how to shoot from different angles and how to use a lot of technical options in cameras,” says Almarzooqi, who lives in Sharjah, the third most populated city. in the UAE.

The students worked on their film projects for three weeks, Monday through Thursday, and had Fridays and weekends free to explore the area. Visits to Lowell, Boston, Harvard University and Six Flags top the list. While walking through Lowell, the students were offered a free boat ride by a Lowell National Historical Park ranger. The class also visited New England Studios in Devens, Massachusetts, the largest Hollywood-style stage located in the state.

The Emirati students, who did not know each other before joining the program, bonded with each other and with the UML students.

Rising UML junior Calista Weissman, who worked for Frank as a teaching assistant in the summer program, quickly befriended international students through their shared interests in creating film and television content.

“When the students arrived, I didn’t know what to expect,” says Weissman. “They were super nice ladies who were my age and wanted to learn filmmaking and have fun. I made friends with all of them.

The feeling was mutual for Moza Alfalasi, who is in her second year at HCT.

“I enjoyed working to produce our film with my new friends that I met during this program,” she says.

One of the big lessons for Weissman was understanding how another person’s culture influences the art of filmmaking.

“I think it’s important to bring international students to campus because even though the principles of film and television are pretty much universal, the way each culture uses them is different, and I think learning that’s really cool,” says Weissman. “It also gives us the opportunity to teach those skills, which they can then take home to create art that represents them and their culture.”

Kamal says this summer program is an important step in establishing an ongoing relationship between UMass Lowell and HCT.

“We look forward to bringing more HCT students to UMass Lowell in the near future,” he says.