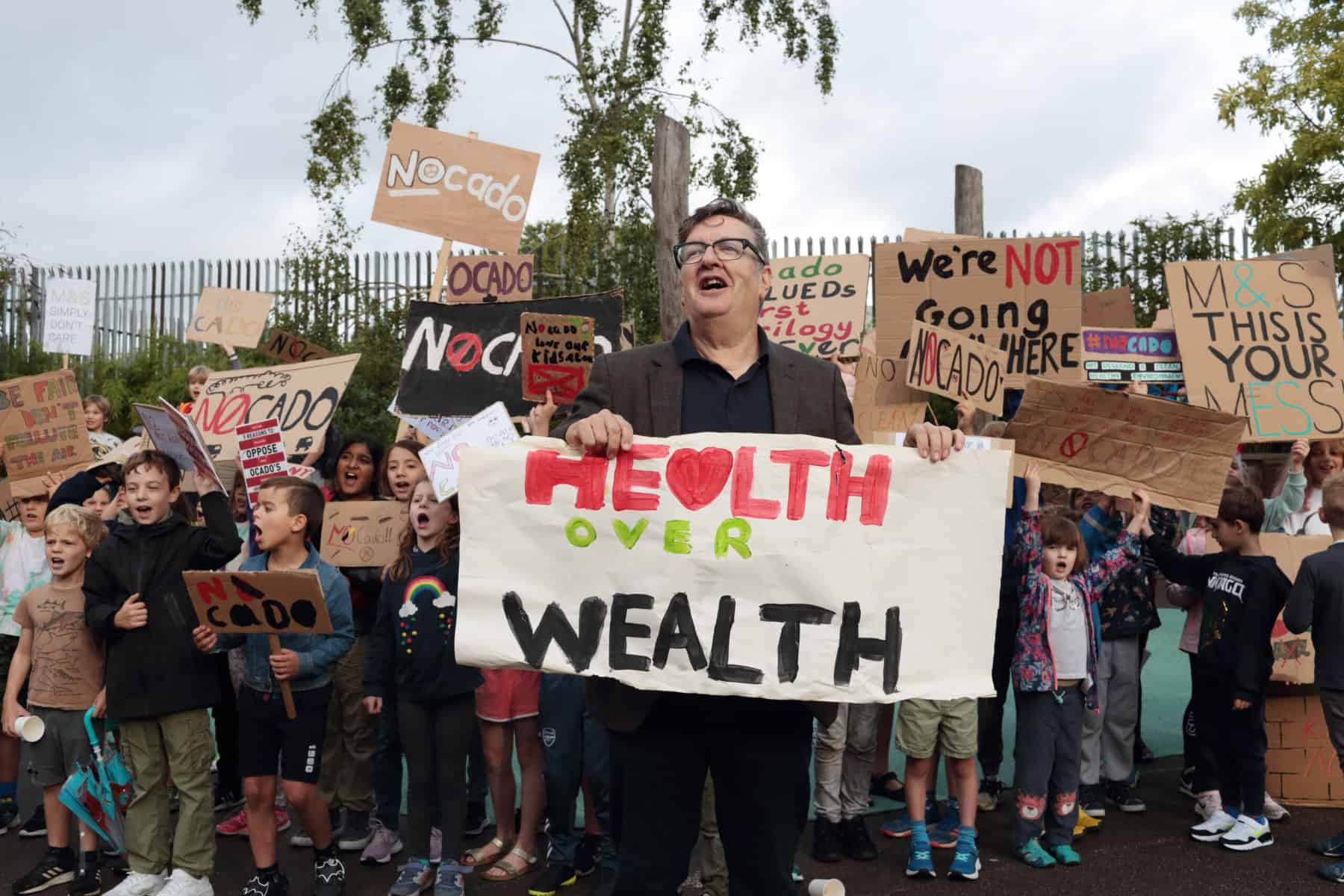 Turner Prize-winning artist Mark Wallinger is working with a community campaign in North London to create a groundbreaking digital art experience that anyone with £1 and more can afford to take part in.

ONE POTATO, TWO POTATOESa major new work by Wallinger, was created for a groundbreaking fundraising initiative by the NOcado campaign. It offers members of the public the chance to help unveil the coin by revealing squares of the image online for as little as £1 each.

The theme, character and appearance of Wallinger’s works are closely guarded secrets. They will be revealed square by square, as the public unveils the 66,528 parts of its surface in an order imagined by the artist. Each entrant will receive a high resolution image of the room once all squares have been revealed. 46 signed posters will be scattered throughout the work to be awarded to participants via a draw.

Proceeds from the work will go to the NOcado campaign, which has made national news with its two-year – and ongoing – battle to stop Ocado and M&S from opening a 24/7 delivery depot in next to a primary school and densely populated housing. Online retailers abused planning loopholes to try to use the Bush Industrial Estate in London N19.

The number of award posters refers to the 465 children at Yerbury Primary School, who will be exposed to damaging and disruptive air, noise and light pollution if this Ocado/M&S filing goes before. Residents of neighboring apartments will be exposed to these ailments 24/7.

The struggle is now reaching a critical stage. After a long battle with the community, Ocado is mounting a third attempt to use the site through planning loopholes. They are also appealing to the Planning Inspectorate to overturn Islington Council’s rejection of their second claim, involving the NOcado campaign in substantial legal costs – making the need for this fundraising initiative all the more important. urgent.

Mark Wallinger, whose studio is near Archway, has been involved in social and political activism since the beginning of his career. State Britain, his 2007 Turner Prize-winning installation, included a recreation of a protest against the war in Iraq at Tate Britain. He created the first artwork for the empty fourth plinth in Trafalgar Square and the series of Labyrinth plaques for the London Underground.

I spend more than half my time in the area so I feel like a local and for me the issues are clear. During the pandemic, many relied on home deliveries, but now we are coming out of it, looking at the destruction it has caused on the high street and therefore on the community.

Wallinger described his response to the challenge of creating an entirely online work for this important cause as “gently satirical.”

Seeing the children playing near the proposed depot, I was struck by the timelessness of their play. hopscotch pattern – which the kids were playing when I was there – and you have a scene that could be centuries old. I added a counter-image of a land of ease where normal work rules don’t apply, inhabited by larger beings who are intoxicated by their own greed.

Art and creativity is a vital part of raising our children, so it’s exciting that a great work of art can help us protect the children of Yerbury and fight off the well-resourced Ocado and M&S. in resources.

The NOcado campaign was created by Yerbury School parents and local residents in December 2019, when it was revealed that Ocado had been granted a license to operate a depot in this densely populated area. The depot had no restrictions on hours of operation and potentially serious consequences for the surrounding community due to toxic diesel emissions, noise and light pollution, traffic congestion and threats to local businesses.

After persuading the local council, London Borough of Islington, to revoke Ocado’s license to operate the site – due to misleading evidence in the company’s original application – NOcado gained national media coverage when it won a battle in the High Court preventing Ocado from overturning the Council’s decision. NOcado, which enjoys strong community support, has since rebuffed a second attempt by Ocado to use the site by abusing planning loopholes. Licensing via a CLEUD (Legal Existing Use or Development Certificate) would allow Ocado to avoid the review and restrictions involved in a full planning application.

NOcado is expanding its efforts nationally with the imminent publication of an independent research report looking at ways to change UK planning laws to close loopholes that allow businesses to locate their operations near schools , hospitals, care homes or existing accommodation.

Funds raised by the online art project will be used to pay for the ongoing and considerable legal costs of the NOcado campaign.

Mark Westall is the founder and editor of FAD magazine, founder and co-editor of Art of Conversation and founder of the @worldoffad platform