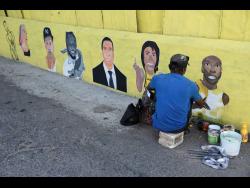 The Jamaican Commission for Cultural Development (JCDC) seeks to promote digital art through its Jamaican visual arts competition and exhibition.

The event was open to performers six years of age and older who are Jamaican citizens or who had resided in Jamaica for at least two years as of the closing date for entries.

A total of 171 award-winning pieces selected in the 2021 edition, covering all seven categories, are now on display at the Jamaica Conference Center in downtown Kingston.

JCDC Visual Arts Development Specialist Nicholas Rose told JIS News the competition has been expanded to include graphic designs to cater for people whose movement has been restricted due to the coronavirus pandemic (COVID-19) .

He pointed out that there is a growing demand for digital art, noting that the industry is becoming lucrative.

â€œIt’s a dynamic industryâ€¦ and we want to align ourselves with it, so we started with graphic designs. But in the future, we hope to include a lot more, like video art and animation, â€Rose said.

He noted, however, that the introduction of new categories would require adjustments to the JCDC’s digital platform.

Rose said none of the graphic designs submitted this year received any accolades or awards.

â€œBut this is the first time. It’s new, and a lot of people didn’t know about it. But this is something that we will promote, reassess and align [with], “he stressed.

The JCDC will also reach out to people in special education to facilitate their participation in the competition.

A total of 364 applications were submitted by email and through JCDC parish offices for the 2021 competition.

â€œIt was a very difficult process, especially collecting all the artwork from all over the island in the midst of the pandemic. Sometimes there were blockages, and sometimes people were unable to move around to get materials to do the job. But the artists and the commission lived up to it, â€said Rose.

He said participants were invited to submit photos of their work online and then in person for evaluation by JCDC referees.

Meanwhile, Rose encourages people to view the pieces on display at the exhibit.

He noted that there is a special section featuring the works of â€œspecial recipientsâ€ and â€œthe strongest works of artâ€.

â€œIt’s a beautiful display, and the responses have been good, so I encourage everyone to see it,â€ he said, noting that the event runs until March 2022.

Rose said the prospect of holding the exhibit in other parts of the island would prove difficult and expensive, given the 171 pieces of art involved.

“But we hope to do things in the future, on a regional basis, maybe in the western and eastern regions, but it’s still ongoing,” he said.

For next year’s competition, Rose said the deadline for submitting nominations would be earlier than usual in light of Jamaica’s upcoming 60th independence anniversary celebrations.

Details regarding entry forms, rules and other aspects of the contest will be announced on the JCDC website.

â€œWith the upcoming Jamaica 60s celebrations, we are planning to do something special about this. So we can open tickets for this special event [towards] at the end of January, hopefully, â€he said.

Culture, Gender, Entertainment and Sports Minister Olivia Grange, in a pre-recorded message during the opening of the virtual exhibit and awards ceremony, urged Jamaicans to bring their families and friends view the exhibits during the holiday season.

â€œAs my ministry prepares for the much anticipated celebrations in honor of Jamaica’s 60th birthday, the exhibit is just a glimpse of what we have in store to celebrate our creative arts,â€ he said. -she adds.

The minister noted that the competition and exhibition give artists, including children and adults, “a chance to shine alongside their works.”

â€œThe works created are not only uplifting and memorable, but also enlightening and heartwarming, with each piece reflecting various aspects of Jamaican daily life and capturing our rich culture,â€ she said.