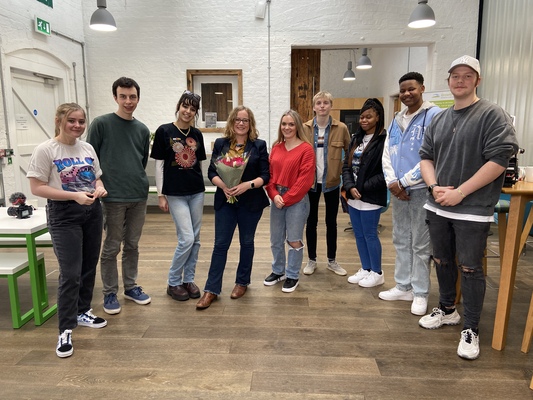 A digital media student from Stratford-upon-Avon College has been accepted into a prestigious course at the BFI Film Academy.

Lewis Hawkins, 17, from Kineton, is in his second year of the Level 3 Extended Diploma in Digital Media at the College.

Alongside his journey, after a successful application process, he was selected to be part of a small team in the BFI Film Academy’s documentary course to create a new documentary to be screened in the capital.

To apply, he pitched the idea of ​​a play on the Free Nelson Mandela concert, which got him noticed and accepted into the training program.

Successful applicants were divided into groups of eight to create a documentary. After discovering that several members of the group lived with a hearing loss, the focus was on a documentary around this subject.

Lewis said: “I’m deaf in my left ear, so that was a topic I could really get into.”

As well as having the chance to use all the state-of-the-art filming equipment provided by BFI, Lewis also took on the role of production coordinator, which meant he was in charge of call sheets, appraisals risks, locations and more: “It’s something I found I was really good at and enjoyed. It’s great to find the name of the role you want to do as a career and now I know for sure!”

Lecturer in digital media at the College, Sarah Downing, was incredibly proud of Lewis’ achievement: “I was really impressed with Lewis’ progress during his extended degree course in creative media, as he showed his dedication to his work and commitment to begins his journey in the film industry.

“Lewis’ participation in the BFI Film Academy’s prestigious documentary production course is a fantastic achievement which has boosted his confidence as a media professional. He should be incredibly proud of this achievement.

The documentaries were screened at a screening in London so that all bands could see each other’s work on the big screen.

You can see the documentary, along with a second behind-the-scenes video, on the Stratford-upon-Avon College website.