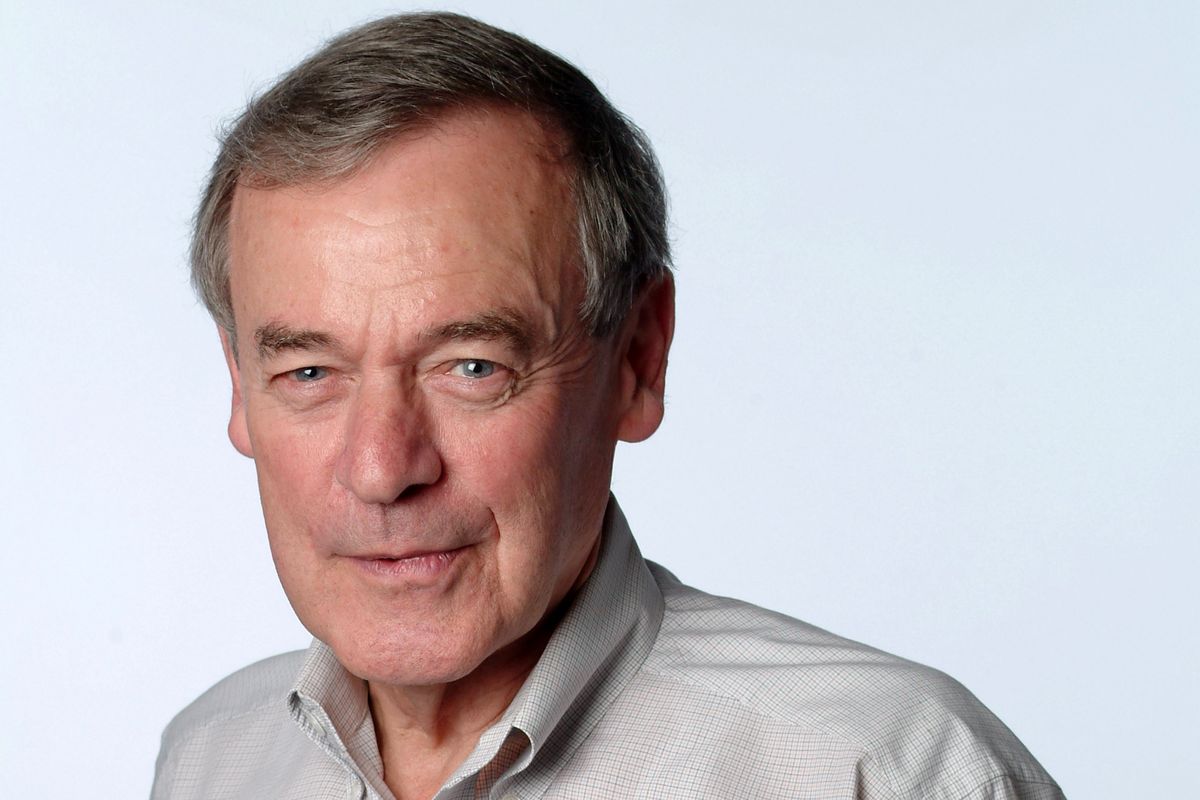 When Merce Cunningham, known as the father of modern American dance, struggled with arthritis in the late 1980s, he sought out software to help him choreograph his productions.

Some Italian producers wanted Mr. Cunningham to create a show and, after reading an article about digital animation software being developed at Simon Fraser University in Burnaby, B.C., put him in touch with the professor responsible for the project, Dr Tom Calvert.

The collaboration between Mr. Cunningham and Dr. Calvert led to the creation of a tool that could be used to show animated characters moving in three-dimensional space. Mr. Cunningham used the program, originally known as Life Forms and renamed DanceForms, to experiment with choreographic ideas. The motion capture functionality has also been incorporated into the technology and it has been deployed around the world.

Dr. Calvert created a digital animation company, Credo Interactive, to market DanceForms. Credo was one of many successes for Dr. Calvert, who died of bladder cancer at the age of 85 on September 28 in a hospice in North Vancouver, British Columbia.

Always a consensus builder, Dr. Calvert has become a digital media pioneer by listening to and bringing together people with very different perspectives.

“It was very early in some of these things that are still considered cutting edge,” said Sang Mah, director of Credo.

A former student of Dr. Calvert, Ms. Mah worked on the development of DanceForms, co-founded Credo, and was CEO in its early days. Dr Calvert, she said, was open to new ideas and able to listen and arouse people’s curiosity and ambition while maintaining an “interdisciplinary vision” that has influenced artists and academics.

“That kind of leadership, it’s not very often that people see it these days, because it doesn’t make the headlines – it’s not sexy,” said his wife, Hiromi Matsui, who worked on diversity and recruitment in the applied sciences field of SFU. Faculty.

According to Ms. Mah, Ms. Matsui and others, Dr. Calvert has shaped careers, communities, businesses, institutions and industries while serving as an educator, researcher, administrator, entrepreneur and mentor. during its 49 years of association with SFU.

“He liked to build things [in his youth]Ms. Matsui said. “But in his career, what he started doing was building projects.” Mostly the big ones.

Among other initiatives, Dr Calvert has led the establishment of national e-learning networks, SFU’s Faculty of Engineering Sciences, its School of Interactive Arts and Technology (SIAT) and the professional master’s program in digital media from the Center for Digital Media, which includes SFU. , the University of British Columbia, the Emily Carr University of Art and Design, and the British Columbia Institute of Technology (BCIT). He has also been instrumental in the development of SFU’s Surrey campus, where digital media is a critical part of learning.

He won the 2017 Canadian Digital Media Pioneer Award from the Canadian Society for Human-Machine Communication, which said Dr Calvert’s impact extended “well beyond his personal work.” And his commitment to interdisciplinary work sets him apart from his peers and “pushes the boundaries of academic teaching, administration and research.”

Thomas William Gillies Calvert was born on April 12, 1936 in the small village of Dunaskin, Scotland, where he lived briefly. He was the eldest of two children of the Reverend Thomas Calvert and Vara Rosemary Holmes (née Gillies) Calvert. His father was a pastor of the Church of Scotland and a Scottish Presbyterian and military chaplain during and after World War II.

Young Tom and his sister, Rosemary, were the products of Mr Calvert’s second marriage after the death of his first wife. The boy developed a love for electrical engineering through his father and maternal grandfather, Rev. William Gillies, also a pastor.

Tom received a copy of the Popular Mechanics book The engineer boy from his father. Mr. Gillies, an author, awarded his widely acclaimed book In the famous Breadalbane: the history of antiques, lands and people of a Highland district on his grandson.

This latest volume details the history and growth of Breadalbane, a neighborhood in Kenmore, Scotland, where Tom and his sister spent their early years before settling in Ireland during WWII; and Edinburgh to complete their studies.

Between 1957 and 1964, he received electrical engineering degrees from University College London (BA), Wayne State University in Detroit (MA), and Carnegie Mellon University in Pittsburgh (PhD). In the meantime, he worked as an instrumentation engineer for Imperial Chemical Industries in Great Britain and Canadair in Montreal; taught for a year at Wayne State, taught at the Western Ontario Institute of Technology in Windsor and received an Ontario Secondary School Certificate.

After five years as a professor of biomedical engineering at Carnegie Mellon University, Dr Calvert applied for a similar position at SFU without realizing that Burnaby was in the Vancouver area. Upon arriving for an interview, he fell in love with the North Shore mountains, which he would later hike in, and Burrard Inlet, where he would sail with his beloved boat. He became a rare full professor in three faculties: computer science; kinesiology; and engineering sciences, which he co-founded.

“It wasn’t just technology for the sake of technology; it was to do something better and in very creative areas, ”said Joanne Curry, vice president of external relations at SFU.

As a graduate student of SFU, Dr Curry worked with Dr Calvert at the Science Council of BC while he was its president. He then recruited her for the post of executive director of a national distance learning network of which he was the spearhead. She and Dr. Calvert have also worked with the Technical University of British Columbia (TechBC), which he helped create, and collaborated on SFU projects. Dr Curry handled the licenses for the new software.

When it came to providing opportunities for women, it was “way ahead of its time,” said Dr Curry. “For me personally, he’s been a big part of every career decision I make, whether he’s the one recruiting me directly or just giving me such great advice.”

SFU took control of TechBC when the NDP government in British Columbia at the time cut funding for the organization. TechBC became SIAT, located on the university’s Surrey campus.

Although Dr Calvert was disappointed with the closure of TechBC, he was happy to see new doors open at SIAT. Ms Matsui said SIAT has helped SFU faculty and student body diversify while allowing women to take on non-traditional roles.

“You have a lot of young women interested in this interactive design while the number of women who are getting into physics and engineering, for example, [and] IT, is still very weak, ”Ms. Matsui said. “So [SIAT’s faculty and students] have a good mix of genres.

Laura Jo Gunter, President and CEO of the Northern Alberta Institute of Technology in Edmonton, said Dr. Calvert inspired her to pursue a career in post-secondary administration while she was policy coordinator at the Science Council of BC .

Ms. Gunter strives to deploy the same collaborative leadership approach as her former boss, who “knew how to move people” regardless of their opinions.

“It was funny because he was such a calm personality,” she said. “But if anything were to happen, he was the person you would call because he was successful in running things – and I still don’t know to this day how he did it.”

SFU alumnus entrepreneur Myles McGovern tries to mentor aspiring business leaders at the University of Calgary the same way Dr Calvert mentored him when he started his software business MC2 collaboration in the early 1990s.

Dr. Calvert, then Vice President of Research at SFU, helped Mr. McGovern launch MC2 with the help of other SFU research and development experts. MC2’s server-based software had 20 million users in 55 countries before the company was sold to information management company Open Text. Mr. McGovern then launched Immersive Media, which sold to Hollywood special effects company Digital Domain for $ 100 million in 2016.

“He had a huge influence on me,” said Mr. McGovern, who was not one of Dr. Calvert’s students at SFU. “I was a young man and young in my career, and Tom was a very supportive character.”

Ironically, after putting Mr. Cunningham in touch with Dr. Calvert, Italian dance producers abandoned their production project due to a lack of funding. But by then the seeds for Mr. Cunningham’s partnership with SFU were planted.

He and SFU enjoyed a 15-year collaboration, recalls Thecla Schiphorst, an interactive arts and technology teacher at SFU who, as a graduate student, helped guide the development of DanceForms.

“The rest is history,” she said.

Dr. Calvert, who was predeceased by a half-brother, leaves his wife, Ms. Matsui; her children, Jason and Rachel, from a previous marriage; a grandchild; a sister; two half-brothers; and a stepson.