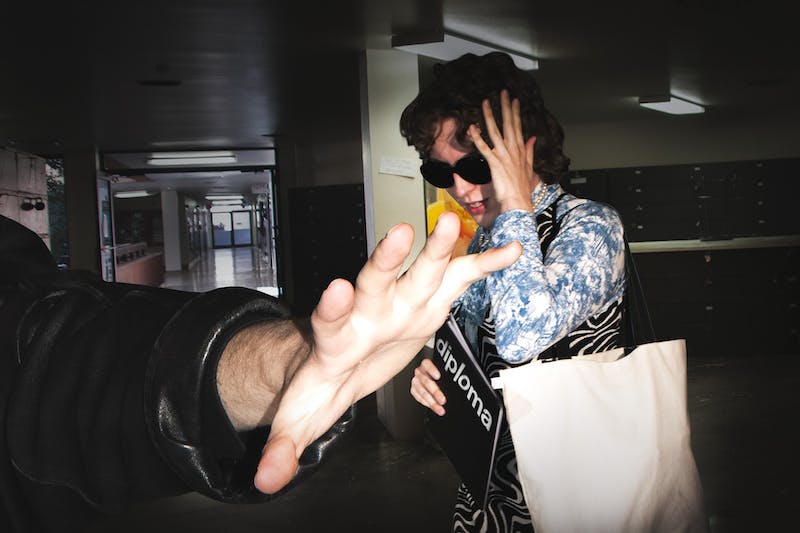 Joseph McKee, art historian and retired design director for the daily Lobo, expects to graduate from the University of New Mexico this spring. Having joined the Lobo three years ago, McKee’s Designs for Paper Through the Years charts the evolution of their design styles and abilities.

“I started at Lobo because I really wanted to work in graphic design. I thought it would be really fun and interesting. I really like collaborating with people and I also like design…I was looking for some sort of community or club that I could join on campus and it worked out pretty well I would say,” McKee said.

Beyond the space Lobo planned for McKee to explore design, he also offered them the community they had first sought to find.

“It’s a really great place to grow and learn…really great support,” McKee said. “Something to fall back on when school was really stressful and things felt up in the air.”

While McKee’s work with the Lobo was extensive, their thesis and independent work, as well as their creations for the campus literary arts magazine “Designs Southwest” and the student art showcase “Arts Unexpected”, allowed them to explore their creativity in a much more in-depth.

“With others (posts), my peers and I can be a lot more creative…You have a lot more time to dive into what you want to come up with with whatever you’re working on…When I was on ‘Southwest Designs’, that’s something I really enjoyed, slowing down and doing a whole lot of research,” McKee said.

With this extra academic time and freedom, McKee has spent the past year analyzing physical bodies in digital space for his senior thesis, particularly approaching digital artist Frederik Heyman. McKee’s thesis on Frederik Heyman was even reposted to Heyman’s own Instagram story.

“Something I’m really interested in is manipulating the human body in digital space, so I’m working on something right now,” McKee said. “I’ve been toying with the idea of ​​cyborgs and how they manifest in contemporary media and how I can develop this idea of ​​the digital combining with the physical.”

McKee is currently exploring a handful of graduate programs outside the United States, with an eye on the Royal Academy of Art outside of Amsterdam.

“I would love to get my master’s degree in graphic design or type design,” McKee said. “If I have the chance, I would love to study abroad… I think it’s mainly in the arts that we really need it. You have to somehow break your comfort zone.

Some of McKee’s work can be viewed on their website, josephmckee.xyz.

Natalie Jude is the culture editor of the Daily Lobo. She can be reached on Twitter @nataloroni or at [email protected]