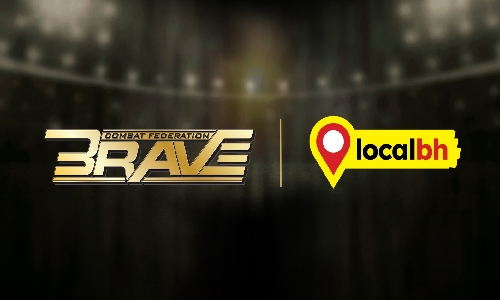 Excitement is building across Bahrain ahead of the return of BRAVE International Combat Week with its biggest edition yet featuring local Bahrain Pride hero Hamza Kooheji.

As the nation moves closer to the long-awaited date, the BRAVE Combat Federation is revealing new partnerships and collaborations, including the announcement of BRAVE International Combat Week (BICW) Local BH as an exclusive digital media partner.

In Bahrain, LocalBH is the premier source of information on things to do, places to see, and positive and trending news, and is rapidly growing in the media and information space for millennials and gen Z. BRAVE CF is proud to welcome Local BH on board for the historic event, BICW – which alongside BRAVE CF 57 features the MMA Super Cup, the first-ever team-vs-team MMA competition and the highest-paying competition for amateur mixed martial arts with huge cash prizes for the top three teams in the world.

The MMA Super Cup will serve as the closing stage for the IMMAF season, as it selects the top 6 nations from the annual world rankings.

Founded in 2016, BRAVE CF is the fastest growing promotion in the world of mixed martial arts.

In just over five years, BRAVE CF has held 56 tournaments in 25 countries around the world, something never achieved before, occupying the top spot in popularity in Asia (largest market share) and the Middle East (the most expensive sports media company).

2022-03-08
Previous Post: What to Know About Thailand’s First-Ever Digital Art Festival at ICONSIAM
Next Post: Digital design program based on the philosophy of the growth mindset